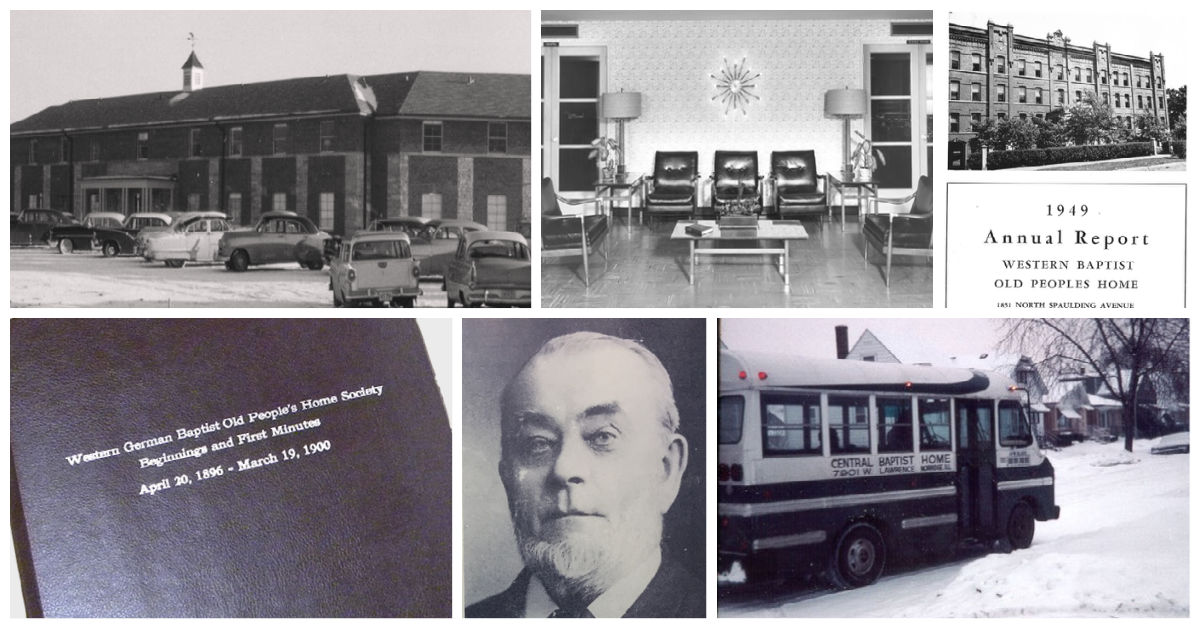 1896 was a tumultuous year for the world. A cholera pandemic that for five years had swept through Africa, Asia, Europe and South America, claiming hundreds of thousands of lives, was coming to an end. Swedish scientist and future Nobel prize winner, Svante August Arrhenius, showed that increasing levels of carbon dioxide were heating up the earth’s surface with potentially dangerous consequences for the planet. In a landmark decision that became known as “separate but equal,” the United States’ Supreme Court upheld the constitutionality of racial segregation in Plessy v. Ferguson, fueling the rapid rise of Jim Crow laws and kindling civil rights activism.

In the middle of this, three elderly men and women quietly moved into a remodeled private home at 1851 N. Spaulding Avenue in Chicago, realizing Pastor Jacob Meier’s dream of creating a home to serve his community’s aging. He called it the Western German Baptist Old People’s Home Society.

The original building at 1851 Spaulding Avenue only housed 12 residents and included a chicken coop and a barn for horses. By 1908, with 60 residents waiting to move in, the Baptist Old People’s Home had already expanded three times to meet the growing numbers of seniors who needed a place to live safely. The entrance fee was $150 and bartering was happily accepted, but if a resident couldn’t pay, he or she wasn’t asked to leave; Meier and his board found the dollars elsewhere. By the 1940s, the Old People’s Home Society had run out of room, so ten acres of land was purchased in Norridge with funds from the Richard and Arthur Genius Trusts. The new facility opened in 1956 and was continually developed over the next 60 years to reflect the latest innovations in health care and changing perspectives on the social, emotional, physical and spiritual well-being of older adults. Robert Butler, the man regarded as the father of modern gerontology, said it plainly, “A long-term care institution should be homelike—not sterile, antiseptic, or reminiscent of a motel. It should be a lively place with many ties to the larger community.” Central Baptist Village has been just such a home and much, much more to countless seniors.

Behind each era’s updates and improvements, with every renovation or remodel, one thing remained unchanged—an unwavering commitment to serving and celebrating seniors. This devotion to compassionate care is part of CBV’s genetic code.

2020 is no less tumultuous than 1896, almost eerily so… with a raging pandemic, burgeoning awareness of racial inequities and looming fears about the dire consequences of CO2 emissions to the earth’s climate. In the middle of this, Central Baptist Village prepares to celebrate its 125th Anniversary of serving and celebrating seniors of all faiths.

And true to Reverend Meier’s word, not once has anyone ever had to leave CBV for financial reasons.